Rather suddenly, the state issued fiat currency bolivar lost 99% of its purchasing power.

Gresham’s law holds that “bad money drives out good money,” meaning that given a choice of currencies (broadly speaking, “money” that serves as a store of value and a means of exchange), people use depreciating “bad” to buy goods and services and hoard “good” money that is appreciating or holding its value.

As this dynamic plays out, eventually there is little “good money” in circulation and the economy suffers accordingly.

3: Therefore, if in the marketplace sellers are willing to accept either Bitcoin or fiat currency as payment, the phenomenon Gresham Effects tells us that buyers will offer the commodity they view as inferior or of lesser value in these economic exchanges. If market participants generally view fiat currency units as inferior or as lesser in value than Bitcoin currency units, and if this value judgment is repeated in many economic exchanges, this can be expected to result in the “bad” money (fiat) driving the “good” money (Bitcoin) from circulation.

Since Bitcoin was not in wide circulation to begin with, Gresham Effects in this case has the effect of preventing or suppressing the wide-scale use of Bitcoin as an exchange currency. This situation can be expected to last for as long as sellers are willing to accept either fiat currency or Bitcoin as payment and buyers view Bitcoin currency units as superior or of greater value than fiat currency units. In short, due to Gresham Effects Bitcoin will not become a widely circulating medium of exchange while these conditions persist.

Interpretation: To me, this indicates or implies that Bitcoin’s use case is more as a ‘reserve currency/store of value’ and less as a currency for use in daily transactions. In general, I will not relinquish my Bitcoins in exchange for t-shirts or Snickers bars if the seller will accept either Bitcoin or fiat currency. I will prefer to pay for t-shirts and Snickers bars using fiat currency.

The significance here is that those who are envisioning a future in which Bitcoin becomes a widely circulating medium of exchange may be envisioning something that is at odds with the laws of economics. Both economic law and empirical evidence seem to indicate that due to Bitcoin’s strictly limited supply, market participants may refrain from offering Bitcoin as payment in daily transactions. Bitcoin may have very important use cases, but its most most important use case may not be a widely circulating medium of exchange.

Thank you, AK. As anyone who follows cryptocurrencies knows, the objections to cryptocurrencies and bitcoin specifically are legion: it’s not stable, it can’t be trusted, it isn’t “real money,” etc.

I’d like to illustrate “real money” with a chart of the bolivar, the national currency of Venezuela. Note that until relatively recently the bolivar traded (at least at the official rate) at around 10 bolivars to one U.S. dollar (USD) and around 25 to the USD on the black market (i.e. free market). These exchange rates slowly moved higher, but few expected the bolivar to depreciate to an appalling free-market rate of 100 to one USD. 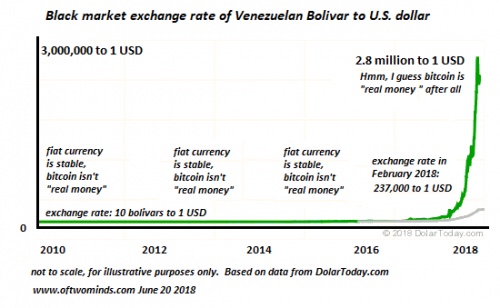 Not to put too fine a point on it, but the Venezuelan citizen who converted all the family’s bolivars to bitcoin two years ago (June 2016) would have preserved the purchasing power of their “money.” So while the Bank of International Settlements (BIS, which is owned by 60 central banks) is pleased to declare bitcoin untrustworthy and in effect, not “real money,” unlike the stable, secure, trustworthy fiat currencies issued by central banks, it pays to reconsider Gresham’s law before concluding bitcoin isn’t “real money.”