AARP is showing it’s age, once again, arguing that bitcoin is “used by criminals, idealists and speculators.” I found this out first hand, when my mother (age 62) called to yell at me, “getting her in with the wrong kind.” You see, in the hubbub of last years crypto gold rush, she asked politely for me to set up a Coinbase account for her. I did this, letting her know it was a $5 billion company, and that her personal information was in good hands. Cut to a few weeks ago, when she happened up on an article while in a doctor’s waiting room.

The American Association of Retired Persons (AARP) has ascribed a bizarre definition to bitcoin in a caustically worded article on its website published on Wednesday, Oct. 10. In the slideshow post titled “Improve Your Financial Literacy With This Glossary,” a heavy dose of contempt is specifically reserved for the description of bitcoin and blockchain in their respective slides, while other terms like “emerging markets” and “exchange-traded funds” are defined using regular financial language.

After beginning with a level-headed definition of the term “asset allocation,” the article moves on to bitcoin, describing it with a few choice words that are at once dismissive and inaccurate. 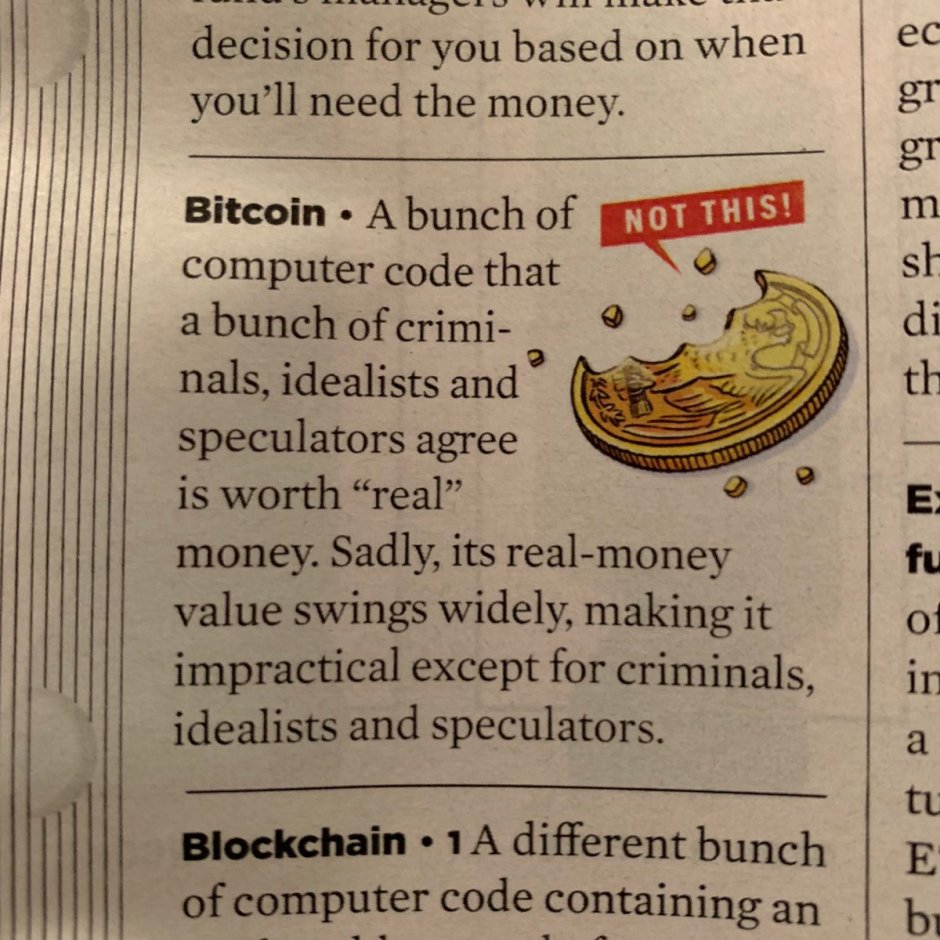 It then takes aim at the term “blockchain,” saying:

“Blockchain : 1. A different bunch of computer code containing an unalterable record of a series of transactions. The most famous is a digital ledger recording all bitcoin transfers. 2. A word often uttered by companies hoping to snare investors’ attention — and dollars.”

The language used to describe these terms is reminiscent of that used by prominent cryptocurrency skeptic Jamie Dimon, who has severally described bitcoin as a “fraud” and a “scam,” implying that it is only taken seriously by less intelligent people. More worrisome from the crypto industry’s point of view is that the publication of this kind of anti-crypto material in a medium aimed at an older demographic potentially exacerbates the clear and existing generational division that already exists on the topic of bitcoin and cryptocurrencies.

Cryptocurrency and the Clash of Generations

A survey report published last month by Circle shows that 25 percent of millennials have expressed interest in purchasing crypto over the next year. This is more than 10 times the rate for so-called Baby Boomers, who make up the vast majority of the demographic represented by the AARP.

While this may seem to be a self-solving problem as younger people will inevitably drive popular culture and make crypto adoption mainstream according to the statistics, the continued anti-crypto stance of many who are used to traditional finance, as illustrated by the AARP article, could harm crypto investment in the short term by discouraging older Americans — who typically have up to 10 times as much money in savings as millennials — from investing in crypto.

Perhaps I was a bit naive in offering to set up a coinbase account for my mother in the heat of a bitcoin price explosion. Despite having her in my best interests, Bitcoin is still a relatively new technology. With all things, it takes time to adopt.

Some of this post was originally written for CCN. It can be found at: